Implementation of Technology in Agriculture Sector 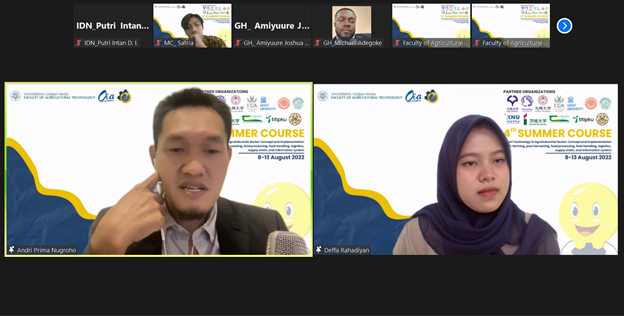 The Summer Course organized by the Faculty of Agricultural Technology UGM has entered its 2nd day on Tuesday, August 9, 2022. The series of events on the second day started at 06.45, which started with the opening by the presenter. Then continued with the first session, namely the presentation of material by Asst. Prof Xiongzhe Han, Ph.D. After the first session ended, it was followed by a Virtual Field Trip and group discussion. The second session started at 09.45 and was hosted by Andri Prima Nugroho, S.T.P., M.Sc., Ph.D. After the break session, the presentation of the material was continued by Prof. Takashi Okayasu, Ph.D at 13.00 as the third session. Today’s activity ended with the presentation of material from Asst. Prof. Ravipim Chaveesuk at 3pm.

The first session was hosted by Asst. Prof. Xiongzhe Han, Ph.D. which is entitled Agricultural Robotics, Remote Sensing and Sensor Development in The Agro-Industry Sector. This session was accompanied by Mrs. Aryanis Mutia Zahra, S.T.P., M.Si as a moderator. Prof. Han explained about Digital Agriculture (DA) and his research such as Auto-Guided Agricultural Field Machinery and UAV-based Precision Agriculture and High Throughput Field Phenotyping. Unmanned farming systems based on digital agriculture can work with autonomous driving farming machines operated in groups using advanced technologies such as 5G, GNSS, AI, and Drones.

Before switching to the next sessions, participants were welcome to see a virtual field trip with the theme of implementing smart farming on local farmers. This virtual field trip shows how Mr. Mino as a representative of local farmers is slowly starting to switch to using technology. The technology that Mr. Mino uses in his garden is called the Field Monitoring System. The Field Monitoring System (FMS) itself is capable of monitoring the real-time state of the land with various sensors such as temperature sensors, humidity, sun intensity, and rain. Data from the sensor will then be forwarded and stored in the cloud and can be accessed via a smartphone. This tool is expected to help farmers and make many young people interested in becoming millennial farmers. After seeing the footage of the field trip, the participants were then divided into several breakout rooms according to their respective groups. In the breakout room, the participants discussed the pros and cons of smart farming, then each group of participants would make a presentation on the results of the discussion.

The second lecture was given by Andri Prima Nugroho, S.T.P., M.Sc., Ph.D entitled The Role of Smart Agriculture to Support Food Security. This session was accompanied by Dr. (cand) Deffa Rahadiyan, S,Si. as a moderator. There are 3 stages of the adaptation of precision agriculture in tropical environments. They are human based, technology based, and the important thing is knowledge based.  If we want to go to smart farming we should realize that there is gap analysis from the existing condition to the ideal condition. So we should combine several knowledge (smart agriculture framework) into 4 research groups to know what the best thing to do to remove the gap. The 4 research groups are called smart agriculture frameworks. The first group is environmental monitoring and assessment. The second is Plant monitoring & assessment. Thirdly is autonomous and agricultural machinery. And the last is knowledge & information management.

The third lecture was given by Prof. Takashi Okayasu, Ph.D who explained the material on Visualization of Plant Phenotype Using Computer Vision. This session was moderated by Muhammad Khoiru Zaki, S.P., M.P., Ph.D. Prof. Takashi in this session explained that agricultural products must be connected from the production side to the consumer side. We must be able to create a sustainable cycle between farmers and consumers in order to maintain the supply chain of agricultural products. However, if we want to maintain the supply chain of agricultural products, we must know the cost of planting. So we have to get information from plants. Prof. Takashi Okayasu developed computer vision to obtain information from plants. This computer vision is developed with various sensors such as sensors for humidity and TST. These sensors will then help maximize the photosynthetic process that occurs during the growth of the plant phenotype. The data information obtained from the sensor can be used to monitor environmental conditions in the planting area so that it can help make decisions about the treatment to be carried out on plants. Takashi Okayasu uses Arduino programming to activate the agricultural sensors. 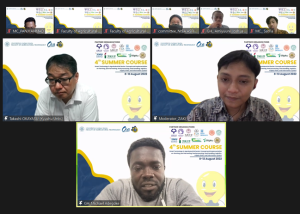 The fourth session which was also the last session was presented by Asst. Prof. Ravipim Chaveesuk. Mrs. Ravipim presentation entitled “The Implementation of Computational Intelligence (Neural Network and Fuzzy Logic) in the Agricultural System”. This session was accompanied by Mr. Imam Bagus N, S.Si. M.Sc. as a moderator. Mrs. Ravipim explained data analytics is the process of analyzing raw data to extract actionable information and insights. There are three components of data analysis such as business knowledge; mathematics, statistics, data visualization, machine learning, deep learning; and programming. In addition, data analytics has stages depending on the level of difficulty and value. They are Descriptive, Diagnostic, Predictive and Prescriptive Data Analytics. Descriptive data analysis is considered past data to answer what happened which generally considers one variable. Data diagnostics is to consider past data and analyze it. Predictive data analytics uses past data to predict what will happen tomorrow or in other words what to expect. And finally, prescriptive data analytics is making decisions. Some big data are known as 3V such as volume, speed, and variation. Data analysis is typically used by these top sectors such as marketing, sales, social media, credit and insurance, and manufacturing.